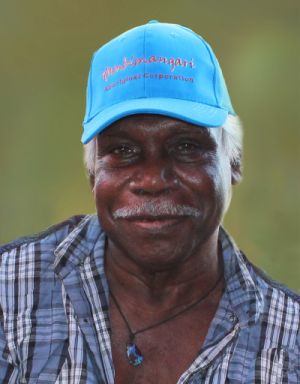 Celebrating the life of the Wandjina Man

A tribute to Donny Woolagoodja, a living treasure, by Stephen Arrow.

On Tuesday, October 10, a small mob of friends and family gathered at the Uniting Church in Booragoon to celebrate the 70th year of an Australian living treasure. His name is Donny Woolagoodja.

Anywhere north of Geraldton in Western Australia is remote. As you progress farther north, infrastructure such as roads, depot agencies and harbours decrease (apart from giant mining load out facilities). At the Kimberley frontier, you reach a point in Australia where there is more or less nothing, save some remote Pearling Stations and mining camps. And it is here, deep within the elevated sandstone plateaux, where the abyss of deep time and countless tropical wet seasons has shaped the breathtakingly beautiful provinces of the Kimberley Coast, we find Donny Woolagoodja’s home land … the exquisite realm of the Dambimangari people.

Dambi land and Sea-Country is defined by a network of rock shelters and galleries containing one of the most important collections of human reflected thought anywhere on earth. In this complex of art and human occupation sites, we see the continuum of the cultural paradigm of the Dambimangari people, their Wandjina creation heroes and the exceptionally beautiful stories of the Dambi people.

Donny Woolagoodja is a living link into this world. Though his art and interpretation into English, Donny continues the tradition of his father before him, creating a shared bridge for everyone, into culture and realm of his beloved Dambimangari people and their Sea Country.

More than 70 years have passed since the birth of Donny Woolagoodja. His life is of great consequence and national significance. Donny’s inclusive sharing of his peoples culture is a gift to all Australians and we are richer for it.