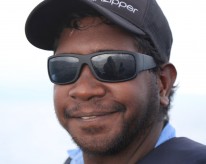 Edmund Jungine – Ranger of the Year

Edmund Jungine, Dambimangari’s Ranger of the Year for 2017, has become an ambassador for the group’s programs and people in the Kimberley region.

The 27-year-old father of two is a quiet achiever for the Dambimangari team of five permanent rangers and 10 casuals.

He has completed training programs for most of the key areas of management and education in Dambi’s traditional country north of Derby.

Apart from an impressive string of qualifications for wildlife monitoring and protection, he has the skills and experience for some of the rangers’ most important work – like sea patrols and fire prevention.

Edmund is one of five rangers to have completed theory training for coxswain’s tickets to crew the Manambadda, a new sophisticated Dambimangari patrol boat due to be launched in the next few weeks.

He has also helped to generate more community awareness of the importance of environmental protection and healthy country programs by presenting to schools and radio audiences – tasks that are becoming increasingly important to the Dambi organisation.

For Edmund, working as a ranger is already a long term passion.

“I started working as a volunteer ranger in 2005, before the ranger team existed, going out on country with some of the elders and the TOs,” he said.

“It meant I could see and learn so much and understand the importance of our heritage.

“It made me feel very different about our culture.

“Now I’m working full time as a ranger, I find a lot of people – particularly younger people in the community – like what we’re doing and many of them want to join us.”

He has worked as a ranger for six years, including a nine-month stint with Mount Gibson Iron.

In future, he will be part of the joint management team working on the Yampi Training Area with the Australian Wildlife Conservancy.

Ranger Co-ordinator Dale Furley says Edmund has become a role model for his colleagues and the broader community.

“He has an excellent work ethic and reflects the kind of professionalism that to make the entire Dambimangari Community proud . Edmund is an inspiration to his peers and young Dambi men and women.”