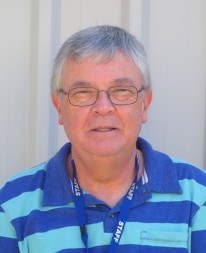 Dambimangari Aboriginal Corporation’s new Chief Executive Officer believes the organisation is set for a bright future based on the work of the foundation directors and staff.

Ken O’Neill joined the corporation on July 30 after the retirement of former CEO Peter McCumstie.

He has extensive experience in local government and several years’ service with the Northern Territory government in Alice Springs where he worked for the Health Department managing services for Aboriginal communities.

He later moved to South Australia where he worked for local authorities in Adelaide and Wakerie on the Murray River.

Last month, Ken and his wife Judy drove to Derby to resume his work for Aboriginal communities

As CEO of one of Western Australia’s most successful Aboriginal Corporations, he will be managing programs of national significance. Dambimangari has Exclusive Native Title to some of the most spectacular land and sea country in Western Australia.

“I’ll be building on a solid foundation,” he said

“And I will be working with an excellent board

“I believe the most important task from here is to keep the organisation as financially sound as possible and to develop the skills and confidence of the staff.

“We also need to build new opportunities and partnerships as quickly as possible.”