One of the world’s finest legacies of rock art in Dambimangari country reflects a rich and complex culture tied to the country and history of people in the Lalia (in English – dreaming or the the dreamtime). The values and beliefs from Lalai underpinned a way of life based on sustainable principles and practical rules for living – how to look after country, how to hunt and fish properly and how to behave with family members. Through these rules, people learned about dangerous places and the environment in which they lived. 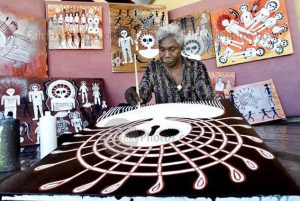 Images of Wandjina and Woongudd appear in the caves where they live. Today, some community members paint the Wandjina as contemporary art to teach the world about Dambimangari culture. One of the leading Dambimangari artists Donny Woolagoodja produced a series of spectacular works for the Sydney Olympics opening ceremony in 2000. The huge paintings and designs – based on Dambimangari art and culture – were a highlight of the ceremony watched by billions of people around the world.

Country and culture are not only important to Dambimangari people but for people throughout Australia. In 2011 Dambimangari country, along with other West Kimberley Traditional Owners’ country, was included in Australia’s National Heritage List. Amongst other things, the listing recognises the importance of the land and the rich culture of the saltwater people.

Despite being resettled in European-built Kimberley communities in the twentieth century, many Dambimangari people still care for their country by refreshing Wandjina rock art, burning at the right time – hunting, gathering, protecting natural water sources and fauna habitat and visiting important places.