Rangers are getting to know our Kimberley Dolphins

Dambimangari Rangers are playing a key role in a scientific study of dolphins in waters off the Kimberley coast.

Working with researchers from Murdoch University Cetacean Research Unit and the Department of Parks and Wildlife, the rangers have been involved in two recent surveys which are shedding some light on marine life in the Prince Regent River and Yampi Sound areas.

As part of the work, the Dambimangari Rangers are developing a range of skills valuable for collecting data on marine wildlife

Murdoch researcher Alex Brown, who helped coordinate the two trips, says that little is known about the dolphins and their conservation status off the Kimberley coast.

The first survey in the Prince Regent River, led by Parks and Wildlife Lalang-garram/Camden Sound Marine Park Rangers, aimed to establish a dolphin monitoring program in the regularly visited section of the Marine Park. Assisted by Dambimangari Ranger Pete O’Connor, the research team confirmed the area’s importance to Australian snubfin and humpback dolphins, found only off northern Australia and southern New Guinea. 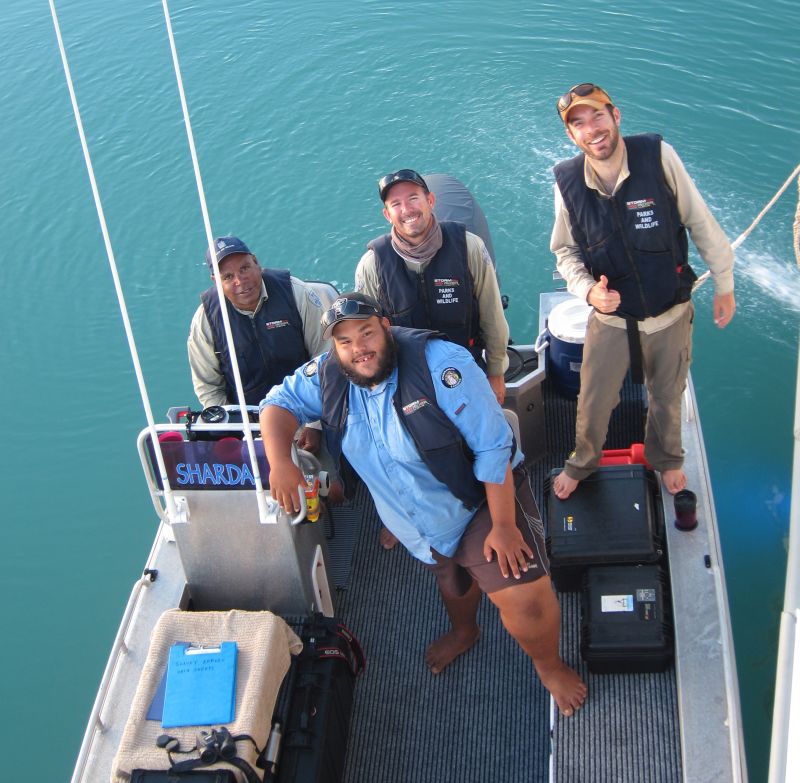 The second survey involved three survey boats operating in the Yampi Sound area to focus on training rangers in dolphin survey techniques – a project funded by the Commonwealth Government, WWF-Australia and Dambimangari.

The rangers, who sighted 22 groups of dolphins during the week-long survey, were supplied with new camera equipment, with which hundreds of photos of dolphin dorsal fins were taken. Individual dolphins can be identified from unique patterns of notches on their dorsal fins, and over the coming weeks these photos will be analysed to estimate how many dolphins were in the survey area.

So far, the data suggest that Yampi Sound supports considerable numbers of bottlenose dolphins, with smaller numbers of snubfin and humpback dolphins.

Healthy Country Co-ordinator James Mansfield said the priority for the Yampi Sound survey was to train the ranger crew in survey strategies.

He said the group was acquiring a range of professional skills and know-how to monitor all the key areas of the Dambimangari coastal waters.

James Mansfield, Ezrah Rastus and Frank Martin on one of the survey boats.

In addition, the rangers were becoming familiar with the operation of vessels and other maritime equipment to be used in future surveys.

Ranger Pete O’Connor said the surveys would have several important benefits for the Dambimangari community.

“It will help us to preserve some of the most important areas of our country – and it will give us the opportunity to teach our young people about the environment and wildlife of the marine parks,” he said.

“In our culture, we’re at one with the animals of the land and the sea.

“Through these programs, we are learning a lot about survey management and conservation.”

Dambimangari and other “saltwater people” of the Kimberley will have an increasingly important role in the management of marine parks under strategies being developed by the State Government and Aboriginal communities.