Lighting up the Opera House

The Kimberley region’s Wandjina culture returned to the national stage on a grand scale this year with a major role in Lighting the Sails celebrations on Sydney Harbour.

The spectacular artworks by Dambimangari artist Donny Woolagoodja were part of Vivid Sydney screening on the famous Sydney Opera House sails in June.

Since then, the Facebook live stream of the two-week event has reached over eight million, with more than a quarter of those from overseas. 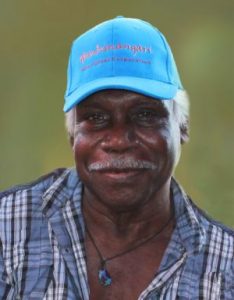 Donny Woolagoodja’s distinctive artwork first reached international audiences in 2000 with the opening of the Sydney Olympic Games. As part of the opening ceremony, billions of viewers from around the world were treated to a display of art from the Kimberley region.

The popular artist and community leader said the artwork was central to Wandjina culture and Dambimangari community development.

One of six Aboriginal artists involved in the project, he works with the Mowanjum Art Gallery in Derby to promote indigenous artwork and culture.

“We have a lot of very fine artists in our region and a great awareness of culture and its importance to our people,” he said.

“This event was an opportunity to share some aspects of our heritage with the wider Australian community.”

Vivid Sydney Creative Director Ignatius Jones said it was an honour to work with the artists in sharing a profound cultural story of Australia’s Aboriginal people through Songlines at Vivid Sydney.

“Each year, Vivid Sydney showcases art and innovation. Cutting-edge animation has been utilised to bring the Songlines projection to life,” he said.

“By placing Songlines on our most significant cultural icon, we put indigenous art at the heart of Australian culture and showcase this amazing story to visitors across the world.”