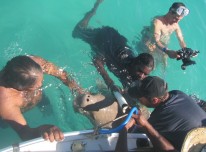 The combination of traditional indigenous know-how and scientific expertise is making an important contribution to the protection of dugongs off North Western Australia.

Dambimangari, Bardi Jawi, Balanggarra and Wunambal Gaambera (Uunguu) Rangers have been working with CSIRO and other Australian scientific agencies to learn more about the habitat and survival strategies of the endangered dugongs.

The latest program has involved Dambimangari and Bardi Jawi rangers taking to the water to attach tracking devices to the threatened species.

Dugongs have a deep cultural significance to the indigenous communities of the Kimberley. The region is home to the world’s largest surviving population of the healthy sea mammals.

CSIRO Principal Research Scientist Peter Bayliss says the Aboriginal Rangers have a critical role to play in setting up management and monitoring programs to secure the dugongs’ future.

“Generations of experience with sustainable cultural harvesting of dugongs have given indigenous communities unique and highly valuable insights into their location, behaviour and ecology,” he said

“The rangers have been trained in tracking, tagging and monitoring programs to identify their habitat “hot spots” in Kimberley waters. The indigenous ranger teams are now working closely with scientists from several agencies and institutes to better understand dugongs and to determine how best to monitor and manage them in future.”

Dugongs are known as cows of the sea because of their taste for seagrass. Search teams have been covering a wide area of Kimberley offshore coastal region using local and indigenous knowledge to identify the best seagrass areas to catch, tag and track their movements using satellite and acoustic tracking technologies.

Dambimangari Healthy Country Coordinator Jarrad Holmes said the Dambimangari and Bardi Jawi Rangers had been working around the bays and islands of their respective Native Title areas for a two week program in August. He said the teams had acquired valuable skills and capabilities to conduct movement studies of dugongs. They used spotter aircraft to direct tracking boats.

“When they find the dugongs the rangers dive into the water and catch them at sea so they can be fitted with satellite and audio tracking devices,” he said

“We’re getting some very valuable information from the studies and we’re hoping the research will continue for many years to come.”

Meanwhile the Dambimangari Rangers are planning for a dolphin survey in October, when the group will work with scientists from Murdoch University.